The World Academy of Science (TWAS): Inviting applications for ‘TWAS-Siwei Cheng Prize’ to recognize economic scientists who have been living and working in a developing country for at least 10 years.

Funding brief: With funding from the Siwei Cheng Foundation of the Education Foundation of the University of Chinese Academy of Sciences, the prize will recognize economic scientists who have been living and working in a developing country for at least 10 years.

The prize reflects the Chinese Academy of Sciences’ strong support to TWAS and, more generally, seeks to build scientific capacity in the developing world. Bai Chunli, president of both the Chinese Academy and TWAS, played a central role in the creation of the TWAS-Siwei Cheng Prize.

The TWAS-Siwei Cheng Prize is named after the renowned Chinese economist Siwei Cheng (1935-2015), an economist, chemical engineer, and major political figure. He is most well-known for his work in modern Chinese economic development as a driving force behind the establishment of ChiNext, a stock exchange designed to provide venture capital in technology companies. His work has had a profound impact on both the Chinese and global economy.

Funding limit:
● From 2017 and for five years total, an annual prize of US$10,000 will be awarded in the field of Economic Sciences.
● The prize is accompanied by a medal.
● The prize will be presented on a special occasion, often coinciding with the General Meeting of TWAS.

Special Notes: Please contact with the donor directly for further clarification and understanding.

Eligible organization: As below

Eligibility:Candidates for the TWAS-Siwei Cheng Prize in Economic Sciences must be economic scientists who have been living and working in a developing country for at least ten years immediately before their nomination. They must meet at least one of the following qualifications:
● Scientific research achievement in economic sciences of outstanding significance for the development of scientific thought.
● Outstanding contribution to the application of economic sciences to sustainable development.
● Members of TWAS and candidates for TWAS membership are not eligible for the prize.
● Self-nominations will not be considered.

● TWAS is inviting nominations from all its members as well as science academies, national research councils, universities and scientific institutions in developing and developed countries.

● Nominations can only be submitted electronically through the on-line nomination platform and clearly state the candidate’s contribution to understanding and addressing economic sciences.
● Nominations of women social scientists and candidates from scientifically lagging countries are particularly encouraged.

Eligible Country: No country bar found (Open to all regions)

How to apply:
● The 2019 TWAS-Siwei Cheng Prize in Economic Sciences’ nominations can only be submitted electronically through the on-line platform by clicking on the “NEW NOMINATION” (http://onlineforms.twas.org/apply/53) button at the bottom of this page.
● To resume working on saved nominations, click on the “RESUME” button (http://onlineforms.twas.org/)  at the bottom of this page.
● The deadline for receiving nominations is 15 March 2018, however we strongly recommend that you do not wait until the deadline but submit the nomination as early as you can to enable us to process it as quickly as possible.
● Before starting compiling the nomination, PLEASE PAY PARTICULAR ATTENTION TO THE MAXIMUM CHARACTERS ALLOWED. 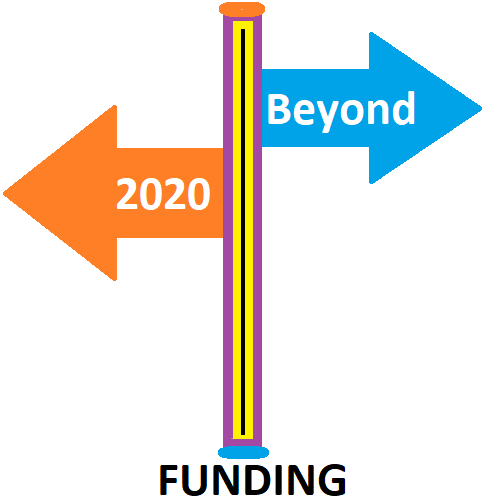 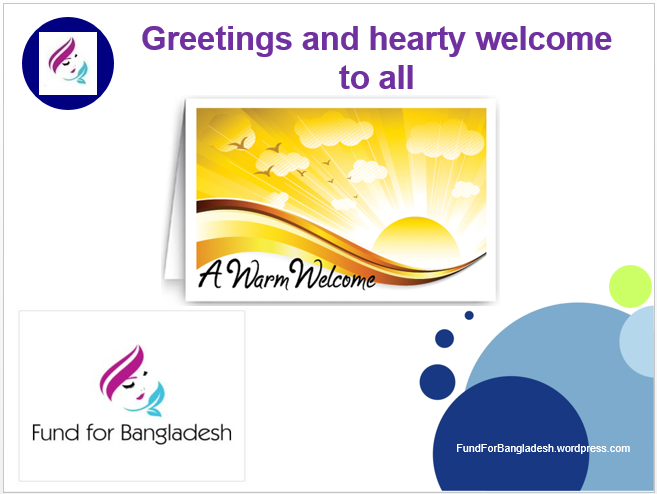 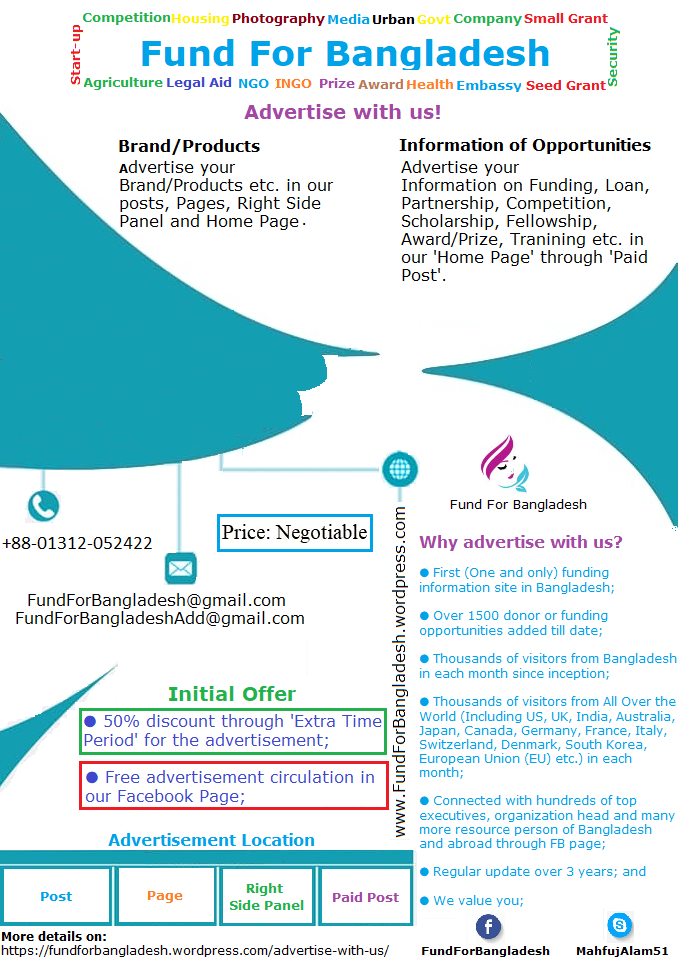 STAY CONNECTED AND UPDATED WITH OUR Facebook Page (“FundForBangladesh“) !

Reach us on Skype: mahfujalam51

Advertisers can reach us at:
FundForBangladeshAdd@gmail.com

Thank you all for your continued support all along!

*Please note that we are facing technical difficulties. Once we are able to overcome the difficulties, we will come back with regular update. Thanks for your patience. 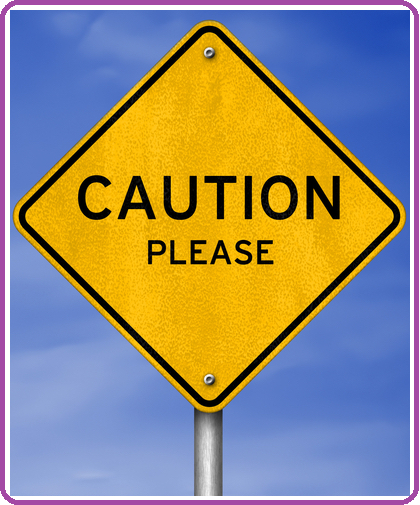 This site does not support any kind of fundamentalism of any religion, religious, social or political hatred, separatism (insurgency), extremism or militancy, undemocratic force, unlawful activities in home and abroad. We believe in equal democratic rights of men and women in the world. We support peace, harmony among communities and a world without poverty, hunger and war. We don’t judge people by religion, colour (caste), own political belief or gender. We dream a world where all evils of the society will be defeated and punished. Humanity must win in every sector.

*Please note that we are not a donor agency, we are searching potential donor calls for Bangladesh, summarizing the donor calls and updating those to our site keeping intact the original texts.
*Please visit our  Service Page to know the details how we can assist you. We don’t guarantee ‘fund’ for anyone or any organization. Our services are now only for the progressive organizations / individuals working in Bangladesh.
*You can find All Posts in brief from Site Map.
*You can find All Funding Categories from Access Funding Short-cut.
*You can reach us through Contact Page  or Contact Form.
*Urgent Contact: Through mail (Mobile / Land Phone Contact-To be updated later)
* Mail: FundForBangladesh@gmail.com 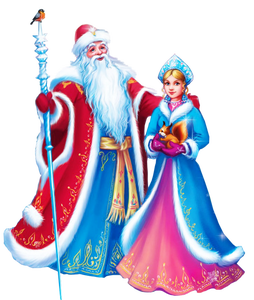 Find Fund of Your Choice! 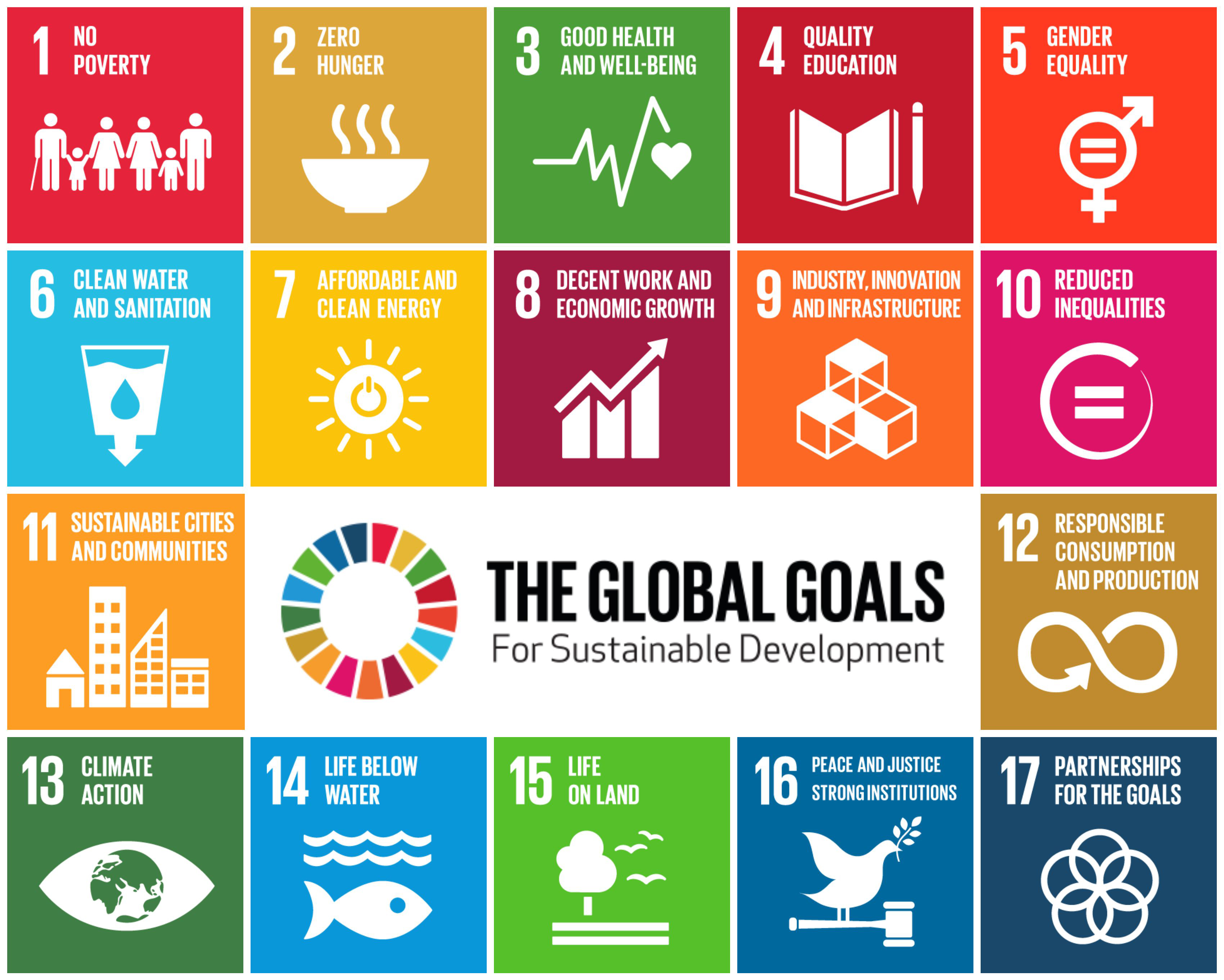 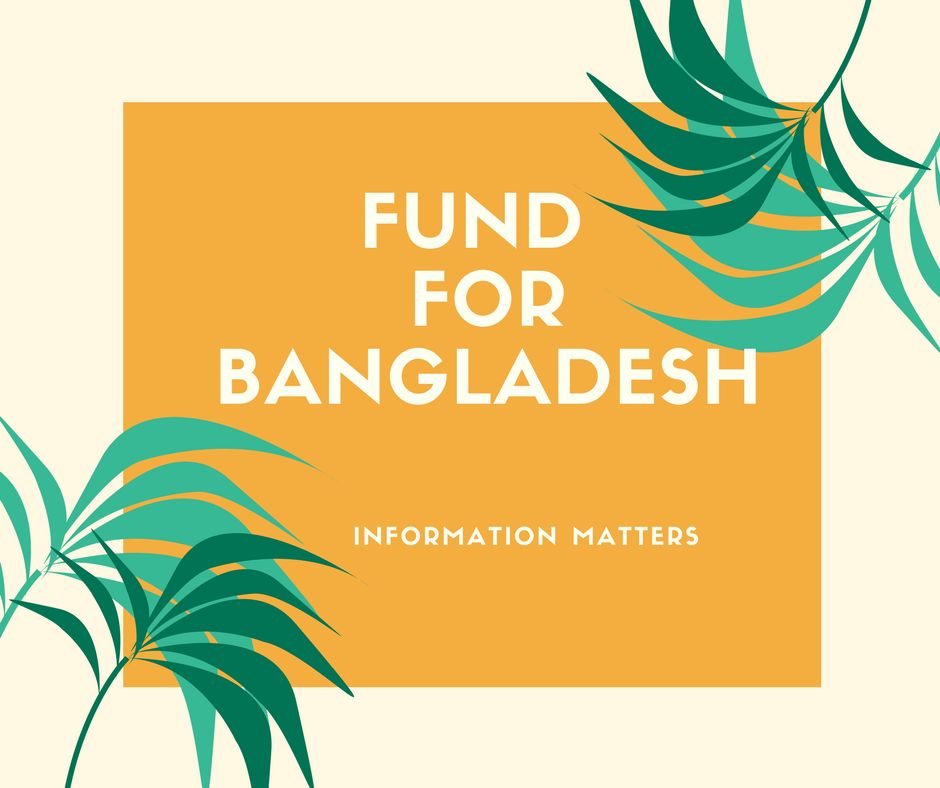 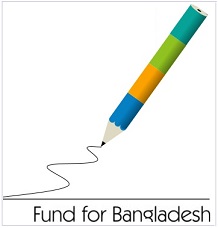 Fund is what asked by everyone. But we often forget that there are huge contribution by the donor, fund raiser and organisation to turn an ‘idea‘ into ‘concept‘ and ‘concept‘ into successful ‘fund‘.

This is not a ‘one man’ game, so as to say. Under extensive scrutiny in different stages of funding process, the love of developed countries reaches to the end beneficiaries of different countries through funding. In this site, we will try to provide resources, funding information and many more which will help the fund raiser gradually.

We would be happy if our effort helps all concerned and ultimately the poorest of poor people of Bangladesh and other countries of the world as well.

Please share your thoughts/suggestions/information about funding or relevant issues related to this site. We will try to focus the valid concerns at soonest possible time.

Please be aware about receiving/applying funds as we will not take any responsibility for any consequences of any stage of funding. This is merely an informative site for the fund-raiser.

Please note that we are trying different themes for this website from where we will choose one. We have been trying current ‘theme’ since ‘June’, 2017. We may change the ‘theme’ if found worthy.

We also want to acknowledge that we do not change the ‘original text’ of the donor. So the credit of the texts of different funding/donor calls definitely reaches to the ‘Donor’ of each call. We do minimum changes in the text what we feel required for ‘presentation’ purpose only in our format.

Please note that all advertisements of this site have been giving by the domain provider . We don’t have any relation with the advertiser. They are appearing automatically as a cost of the ‘free’ domain!

Moreover, we want to announce that we want to work with resource persons of Bangladesh or abroad who are capable of writing e-books on different issues related to NGOs or INGOs. If you are interested, please visit our E-books Page (click here) for sample topics. Foreign nationals are welcome along with the citizens of Bangladesh.

At last, we want to say that we would be happy if our effort contributes to the extensive effort of fund-raiser of different development organisations (Govt. Org. or NGO or INGO).

Thank you all for your continued support all along our journey!

1. Please note that all advertisement of this site are given by the domain provider. We don’t have any relation with the advertiser. They are appearing automatically as a cost of the ‘free’ domain!

2. Please be aware about receiving/applying funds as we will not take any responsibility for any consequences of any stage of funding. This is merely a informative site for the fund-raiser.

3. Please do not confuse with any texts, graphics or serials used in this site as these do not have any other meaning, from any sense.

4. All the credit goes to the donors for texts of each donor calls.

IRICEUP AGAINST HUNGER! PLAY AND DONATE!